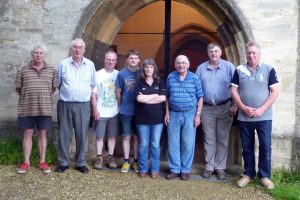 They also ring the bells on special occasions. Following their successful ringing of a quarter peal to mark the Queen’s 90th birthday on April 21st 2016,  Steeple Aston Bell ringers and friends took on the much more arduous task of ringing a full peal for her official birthday on Sunday, 12th June 2016.

The Bellringers are a very sociable group and welcome visitors. They also have many social events through the year. Anyone over the age of 10 is welcome to join the group. The only proviso is that you must be able to climb the stairs.

There is no fee to pay but when you are able to handle a bell you may become a member of the Oxford Diocesan Guild of Church Bell Ringers, for which an annual subscription is £9. If you are interested in joining, either give Graham a call to discuss ringing or just turn up on a practice night and have a try.

The main purpose of the Handbell Ringers is to play Christmas carols door-to-door round Steeple and Middle Aston in the two weeks leading up to Christmas. They choose a different charity to collect for every year.

They meet to practise on Sunday evenings at 7.30pm in a member’s house. Meetings start in September if they have been asked to entertain for a given function, but in late October if they are just practising carols.

The handbells are the property of the parish church and it is traditional that handbell ringers are church bell ringers as well. Anyone over the age of 10 is welcome to join the group. You don’t necessarily have to be able to read music as they play by numbers.

Steeple Aston Choral Society was founded over thirty years ago for local singers of all abilities. It is very fortunate to have Paul Badley, a professional solo and ensemble singer and teacher, as its Director, and Paul Herrington, a teacher, composer/arranger and LCM examination local representative, as its accompanist.

It is also honoured to have another local professional musician, Heather Cleobury, as its Honorary Patron.

Currently the Society has about thirty members who perform three concerts a year in either the Village Hall, or the Church.

Concert rehearsals are on Mondays from 7.45-9.45pm in the Village Hall. Anyone who enjoys socialising and music making with others, is welcome. There are no auditions – just come along and join in.

For more information on concerts and membership go to www.facebook.com/steepleastonchoralsociety/

Our special Beethoven Birthday Concert that we were so looking forward to performing for you on Sunday 22 November, has had to be postponed until Sunday 13 June 2021. (Unless our musical Fairy Godmother waves her magic wand and we can begin rehearsing in January 2021 for performance on Sunday 28 March.)

In the meantime, we are getting together every Monday at 7.30 on Skype for a ‘note-bash,’ so when we can rehearse properly we have already covered the basics. (Singing online is impossible  due to the time lag – do not be fooled with what you hear on television, it has taken a team of sound engineers days to synchronise everything.) If you would like to join us for our ‘note-bash’ please contact Margaret Bulleyment (details above.)

Our Beethoven Birthday Concert will feature our special guest musician – Dr. Paul Whittaker OBE. He is a profoundly deaf pianist and organist who ‘signs’ music. (He signed Beethoven’s Choral Symphony with the Halle Orchestra and Sir Mark Elder at the Barbican Beethoven Weekend last February.)

The concert will include choir numbers (Hallelujah from The Mount of Olives; Creation Hymn etc.) organ and trumpet solos; tenor and soprano solos; a piano trio; a piano duet and an adaptation of the Pathetique sonata for Power of Voice Silent Moments.

The concert will end with our SACS accompanist, composer and friend of Paul Whittaker, Paul Herrington’s Gloria, written for choir, organ, trumpet, violin and cello. It was written especially for SACS and will be signed by Paul Whittaker.

If you have any deaf or partially hearing friends, do bring them along to this concert.

Books delivered to your door